At CREA Mont-Blanc’s last Science Sandwich, Léna Gruas presented the initial results of her PhD on the interactions between recreational mountain users and emblematic fauna.  Her multidisciplinary study combines sociology and ecology, and sheds new light on our relationship with ecosystems. What would an ibex respond to the question “Do you feel like you are disturbed by the local fauna?”  Because she can’t ask the Alp’s emblematic fauna directly, Léna Gruas has chosen to study humans and their perception of the disturbance they cause when skiing, trail running, snowshoeing and hiking.   Read on to discover the CREA Mont-Blanc’s new Service Civique volunteer, Marie Anière-Martinez’s thoughts on the presentation.

Toward a better understanding of user profiles: unphased skiers and wide-eyed snowshoers?

Like marmots carefully eyeing hikers, Léna and her team await the return of skiers and snowshoers, questionnaires in hand, at a trailhead in the Aiguilles Rouges, armed with patience and good humor.  He study has been carried out in three emblematic ranges in the French Alps: the Aiguilles Rouges natural Reserve, the Bauges regional park and the national wildlife and hunting reserve in Belledonne.  Léna informs us that her study will expand this spring to the Vanoise National Park, in order to add a sit with the nation’s top protected status to the analysis.

Currently, 1,720 surveys have been filled out.  Léna gives us an overview of the sociology and environmental psychology related to the study, allowing us to consider how economic standing and living environments can affect behavior.   Contrary to popular belief, Léna’s initial results indicate a typology of “typical profiles” and a breakdown of respondents reactions and feelings in correlation with their socio-economic status.  Notably, we learned that 50% of backcountry skiers say that they were “amazed” by a wildlife sighting, versus 80% of snowshoers.  For summer sports, trail runners reported being the most enthused by wildlife encounters.

A few of the biologists in the room wonder out loud “what about the behavioral responses of wildlife?”  The results of the study indicate a strong link between the perception of disturbance and the behavior of the animal.  For example, if the distance between the person and the animal is significant, then the person’s perception is that they have not disturbed the animal.   Some animal reactions led to confusion among respondents about their impact: if an animal makes a noise or changes it’s behavior (but doesn’t move), has it been disturbed?

A study cited by Léna (available here) highlighted rises in physiological stress, decreases in habitat density and reproduction rates observed in species that are the most often exposed to outdoor recreationists.  The authors of the article reviewed 274 articles examining the interactions between recreation and biodiversity and concluded that 59% of the effects of these interactions are “negative”. Accordingly, survival rates and range of wildlife can be directly influenced by outdoor sports—a fact that makes us think about the different ways we could mitigate our impact when heading out into nature.

During the exchanges after Léna’s presentation, the conversation tended toward biology.  Audience members started discussing the relationship between rises in stress levels in animals and longevity.  Several studies in Switzerland and the United States have focused on the impacts of humans repeatedly passing through hibernation zones, and increases in heart rate in disturbed animals.  While most survey respondents reported that they were aware of wildlife “quiet zones” and tended to respect them, Léna’s study found that 17.5% of those surveyed admitted to not respecting them.  This result suggests a potential inroad for raising awareness and education in mountain areas. The land managers in the audience spoke about their experience and the observations they carry out on the evolution of wildlife distribution.  Interesting exchanges continue with perspectives coming from a variety of disciplines with different mitigation methods proposed: should we focus on spatial or temporal restrictions to access or should we focus more on education and awareness?

As the conversation tended toward a discussion about the Alpine chough, we recognize that this Science Sandwich shed light on our relationship with alpine animal biodiversity and provided us all with food for thought about our role in alpine ecosystems.

Biodiv´sports: a French project aiming to reconcile outdoor sports and respect for biodiversity

For more language (in English, French, Italian, German and Slovak) about fauna before you head out on your next trip: Be Part of The Mountain 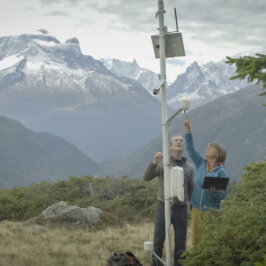 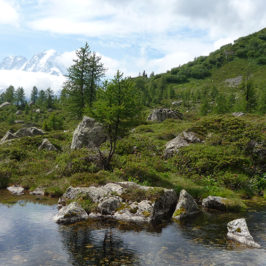 CREA Mont-Blanc’s 2019 Annual Report, which was published in advance of the annual general assembly,...

Warm year or cold year? Shifts in phenological events? How does flora adapt to a... 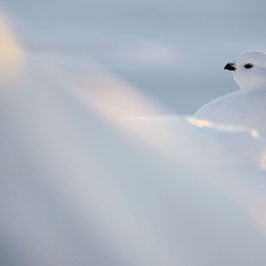 Long considered a symbol of the harsh alpine environment, the rock ptarmigan risks to lose...

CREA Mont-Blanc has launched a series of scientific seminars open to the public.  On the...